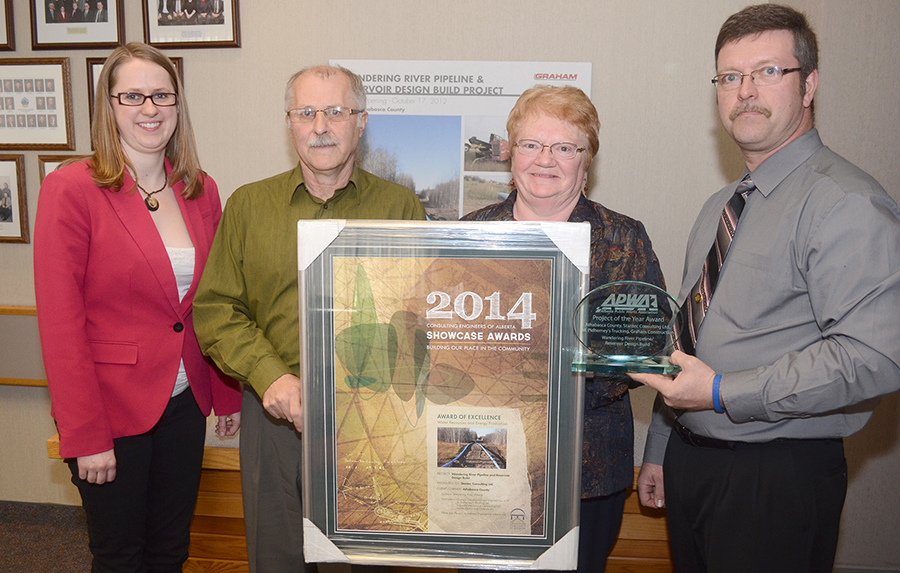 The first award was from the Canadian Engineering Association (CEA) who presented the Design Build Team consisting of Graham Construction, M. Pidherney’s Trucking, Stantec Consulting, Associated Engineering and Athabasca County with an Award of Excellence on February 6, 2014.

The second award was a Project of the Year Award presented by the Alberta Public Works Association to the Design Build Team at a County Council meeting on March 11, 2014.

The Wandering River regional waterline project was seen as being unique for a number of reasons:
• It was the first regional water project in Alberta completed under a Design-Build delivery model;
• It’s the world’s longest directional drilled fusible polyvinyl chloride pipe (FPVC) system;
• Ninety-five percent of the 88 km system was installed using directional drilling.

In addition to the water transmission pipeline, a system flushing program was developed and implemented to replace the water in all of the municipalities serviced by the Aspen Regional Water Services Commission (ARWSC).
During the design and construction of the project the water treatment plant was undergoing modifications to switch the system over to chloraminated water providing disinfection over a longer period of time. This was of particular importance to the system given the extensive pipeline length.

Also of note is the creation of a new reservoir, pumping station and truck fill in Wandering River as part of the project. The reservoir serves 70 residences near the community.

The project was completed in just 13 months, ending in October 2012. Ownership of the water distribution line has since been turned over from the County to the Athabasca Regional Water Services Commission.