The Athabasca Region has many beautiful lakes and boat owners can play a part in protecting them by taking a few extra steps to clean their boats. Invasive aquatic species and plants are a growing concern when boats are used in more than one body of water.

Zebra mussels can be spread from one body of water to another on your boat or gear, if they are not cleaned, drained, and dried properly between uses. They are two of many aquatic invasive species in Alberta.

In fact, adult mussels can attach themselves onto hard surfaces and can be hard to spot on a watercraft and microscopic forms of the mussels can survive in standing water for many days. If this standing water is moved into a new body of water, it may become infested as well.

Whirling Disease infects several Salmonid species and have been detected in 4 major Alberta watersheds, according to the Athabasca Watershed Council. It is one of the greatest threats destroying aquatic species in Southern Alberta and has been detected in the Bow River, North Saskatchewan River, Oldman River, and Red Deer River.

Although it hasn’t been detected in the Athabasca Watershed, awareness of its presence will help prevent it from spreading to northern Alberta. 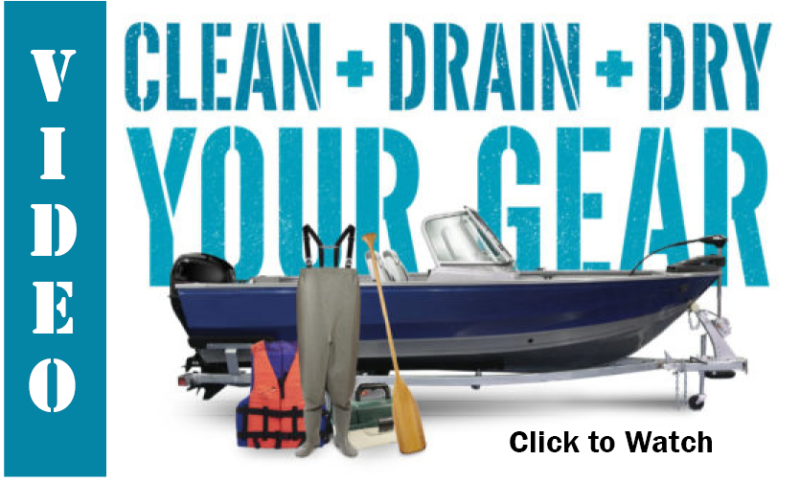 At the lake – Inspect and clean all watercraft, trailers, and gear after each day on the lake. Remove all sand, mud, water, and plant traces before leaving the shoreline.

Away from the lake – Rinse, scrub, or pressure wash your boat on dry land away from storm sewers, ditches, or waterways. Do not use a local car wash. You may unknowingly be introducing invasive species into local bodies of water if the water from the car wash is released into the environment.

Before leaving for home drain all water from internal compartments such as ballasts, bilges, and live wells. Bait buckets, coolers, life jackets, and other gear may also retain water.

Raise and lower outboard engines several times to ensure all water has drained out. Non-motorized watercraft can be inverted, or tilted, to allow water to drain.

Don’t forget to pull the plug! In Alberta, it’s illegal to transport your watercraft with the drain plug still in place. Watercraft Users must demonstrate upon inspection that their watercraft has been drained of all standing water.

After washing, dry the watercraft and gear completely between trips and allow the wet areas of your boat to air dry. Leave compartments open and sponge out standing water.

Alberta Parks runs mandatory boat inspections during the summer months. To find out more about what to expect click on the link below.

Information About Other Invasive Species: