2019 Pioneer Farm Woman of the Year 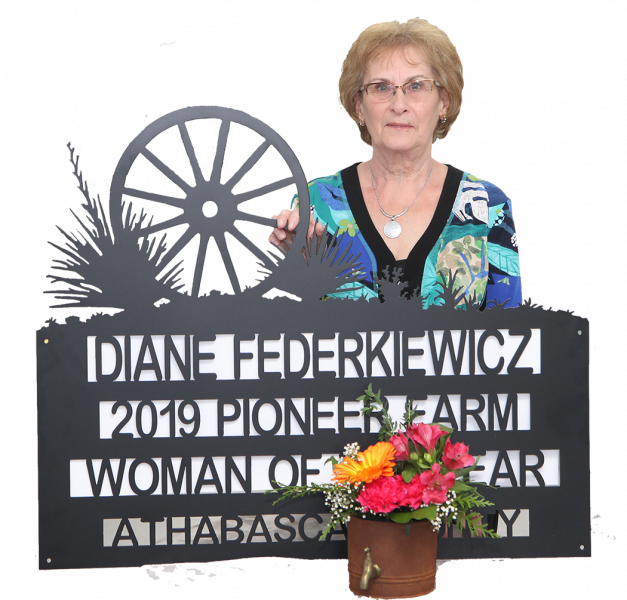 Diane grew up on a farm near Hylo and has since dedicated her life to a rural lifestyle. As a child she walked 7 miles to school, helped feed the animals, picked rocks, packed water and wood to the house.

It must have agreed with her at a personal level because she married Ken Federkiewicz in 1965 and moved to the family farm in the Blue Jay region near Atmore. As a young wife and mother, alongside her husband, she used her skills to help build the family farm into a thriving business which she still participates in today.

In October 2016 Diane and Ken celebrated their 50th wedding anniversary with their family and friends. They have 4 grandchildren, and 3 great grandchildren.

Diane is truly the heart of the farm. She has always been integral to all aspects of its operations and never lost focus of what it meant to her family.

Agriculture was the main source of income for Diane and her family. When her husband was working away, Diane helped ensure the farm’s viability with son Kevin.

This included raising chickens, turkeys, pigs and tending up to 350 head of cattle as part of the farm’s cattle operation. Calving season was always a challenge and Diane could be found alongside her husband and son tending to the newborns and mothers in all kinds of weather conditions. In winter Diane would be out in the corrals opening gates, feeding bales and providing bedding for the animals.

Diane was no stranger to operating farm equipment. While Ken was away working, Diane would also wake up early in the morning to rake hay, then switch to the stooker to stack all the square bales. She also pulled others out of mud holes, helped with repairs, and at harvest helped to haul grain and move augers.

Her garden was always a source of pride and it was rare to find a weed or bug in it. As the need for food increased, so did the size of the garden by a few rows each year. Diane not only fed her husband and children with its bounty, but shared with family and friends. This included her famous recipe for sauerkraut/cabbage rolls which she freely shared with others.

Staying involved with community has always been important to Diane. She was an active member of the Agricultural Farm Woman’s Committee, (which included the Farm Woman of the Year) for numerous years. Diane has been involved in the Grassland Ag Society since it was formed (taking the role of secretary and volunteering at countless events.

She is also a member of the Ukrainian Greek Orthodox Church Ladies Group which catered Ukrainian meals to the community for many years. She became the first one to call when it came to planning meals for socials, weddings or funerals, and on occasion provides some advice to those who ask for it.

She helps-out in any way she can when it comes to supporting the community. Diane volunteers at the hot lunch program at the Grassland School and has been for several years.

Family has always been a priority for Diane. She would often pack up the children and make the trek back and forth to Fort McMurray to visit Ken. Driving alone on terrible dirt roads in all types of road conditions with two small children was a tremendous feat for many people, but it didn’t stop Diane from spending some family time together.

Diane’s life has been dedicated to raising her children, caring for family and friends, being active in the community, and promoting life on the farm. She is selfless of her time, always giving to others before herself.

Son Kevin, who nominated Diane for the Pioneer Farm Woman of the Year Award, describes Diane as an extremely mild-mannered and affectionate woman who loves her family and friends. This is reflected by how she is received by the people of the community and county. She is a strong role model to her children, grandchildren, friends and many members of the community by being kind and always doing what is right.

Diagnosed with a rare blood cancer, she received chemotherapy and still maintained her farm lifestyle. Nothing was going to keep her down, and she is now in remission.

Not many people can say they have worked every day, in tough times, in extreme weather conditions, to be a farmer’s wife their whole life. But she did it because she loves it, and the lifestyle.

Kevin says, “I am so proud of our Mother and thankful for her everyday.”