2021 Pioneer Farm Woman of the Year 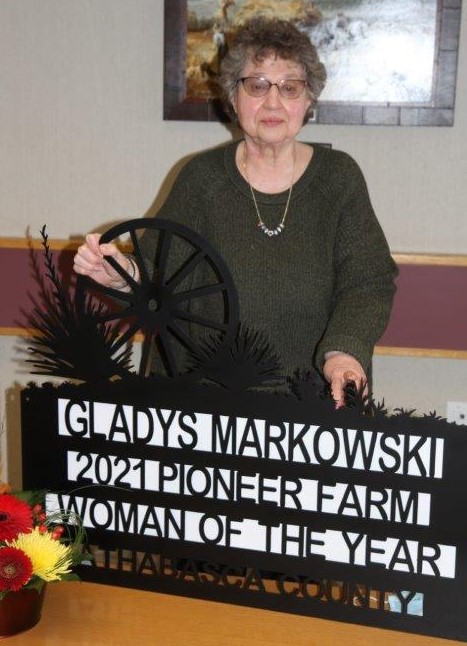 Gladys Markowski was born and raised north of Clyde in the Halach area. She was raised on a mixed farm focusing on dairy production and laying hens.  Growing up, Gladys helped with all the farm chores, prepared meals, and looked after her younger sister while her parents worked in the field.

In 1966 Gladys married Ed Markowski and moved from the Halach area to the far north of George Lake. During those early years, the couple and their young family had no running water, and the house was heated with wood and coal.  In 1980, Ed and Gladys took on other farming operations in the Halach area, focusing on grain farming. Equipment was moved between the farms.

Gladys was very involved in the day-to-day farm production, especially during the times when Ed worked away during the winter season. Then all the farm responsibilities fell on Gladys.

They sold hay to northern communities such as Wabasca, Trout Lake, and Red Earth. A load of hay would be 300 square bales, and it was not uncommon for Gladys to help load the bales.

Gladys raised three sons and went to great lengths to ensure their homework was always done. She instilled the value of commitment and taught her sons that school came before the farm.

George Lake had no shortage of rocks, and Gladys spent many hours spent picking rocks and doing other farm chores. She credits the success of their farm to the partnership she and Ed had working together. She loved farming, seeing the baby calves, smelling freshly cut hay, and hearing the sound of a combine.

Gladys was involved in the Forfar community and served on the executive committee for several years. She was always willing to help neighbours and friends and pitched in during special occasions by preparing food and cleaning the community hall.

A role model for her children and grandchildren, Gladys taught them to work hard, be committed, and always think of friends and the community. Helping friends and neighbours has been a priority for Gladys and Ed.

Son Ross nominated Gladys, noting there were tough times operating a farm, and it was not always easy. There were financial, time, and health sacrifices made to succeed in the farm. There was no hired help on the farm, just Gladys, Ed, and their three sons operating the farm.

Ross added that after receiving a 50-year farm award in 2005, Gladys and Ed continued farming until 2018, when they retired. Over 60 years of farming, going through interest rates over 18% and wet falls when crops never got harvested shows the true testament of perseverance and dedication. “It’s hard to imagine anyone going through that in present-day times,” Ross stated.